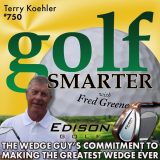 750: Terry “The Wedge Guy” Koehler returns to talk about his decades long quest to create the greatest wedge ever made that benefits the average recreational player. According to Terry, Chairman and Director of Innovation for Edison Wedges, wedge technology has not kept up with balls, drivers and irons. Hybrids and fairway metals are relatively new categories of clubs. Yet, today’s wedges look exactly like they did in the 1950s, but the demands are greater than ever.

Our next giveaway is for a custom fit Edison Wedge of your choice courtesy of Terry and EdisonWedges.com. Deadline to enter is Sunday, August 9, 2020 at Midnight PDT/3a EDT. Enter at GolfSmarter.com/giveaway2020. Listen for details.

Congratulations to Chris Goble of Elkhorn, NE, winner of a dozen Eagle quality, premium used balls of his choice courtesy of TwoGuysWithGolfBalls.com.

This week on Golf Smarter Mulligans #66, we offer a rare combination of compelling teacher who also boasts a great story. Christopher Smith set a Speed Golf record in 2005 that he still holds today. He shot 65 in 44 minutes with only 6 clubs! Chris is featured in what was originally episode 154 called “Pick Up The Pace to Pick Up Your Game”

How would you like a free copy of Tony Manzoni’s video “The Lost Fundamental”? All you have to do is write a review for Golf Smarter in Apple Podcasts (or where ever you subscribe to Golf Smarter) and forward your comments to @golfsmarter on Twitter, Facebook, or Instagram, or via email to [email protected]

As this week is the opening of the 2020 MLB season, it’s also the start of the fourth season of the Radio Baseball Cards podcast. If you’re a fan of baseball, history, and great stories, you’ll love Radio Baseball Cards. Originally a radio pre-game show in 1987, these 2 minute episodes hosted by Hall of Fame Pitcher Don Drysdale feature the greatest players of the 20th Century sharing moments of their lives in and around the game. We kick off 2020 with Don Baylor talking about the pressure he faced in the 1960s as the first black student in a Texas all-white Jr. High School.