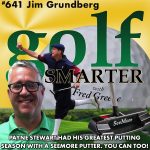 641: The iconic image of Payne Stewart winning the 1999 U.S. Open is etched into our collective golf memories forever. Did you know that he only won twice on the Tour between his 1991 and 1999 US Open victories? One of those wins was also in 1999, which is the year he switched to a SeeMore putter. SeeMore was also the winning putter for both of Zach Johnson’s Majors at the 2007 Masters and his incredible clutch putting performance at the 2015 Open Championship at St. Andrews. SeeMore can help you too because of their patented RifleScope Technology (RST) which allows you to set up to the putter perfectly each and every time in relation to your intended target line. Our guest is the CEO of SeeMore, Jim Grundberg who talks about the history and design of the putter and how it’s heaven sent for amateur golfers.

Tell them Golf Smarter sent you at SeeMore.com and get a free hat or t-shirt. Pay only $25 to have your initials etched in your new SeeMore putter (normally $40).

This episode of Golf Smarter is brought to you by Peter Millar Golf. Head over to PeterMillar.com/GOLFSMARTER to check out some of my Peter Millar favorites. Use this link and you’ll receive complimentary shipping and a free hat valued at $30! Peter Millar is a premium American lifestyle brand featuring a wide range of casual sportswear, tailored menswear, and luxury performance golf apparel.

A Hole By Hole Game Plan For Smarter Golf by Dr. Joe Parent of Zen Golf

What Winning Golf Teaches Us About Winning In Business