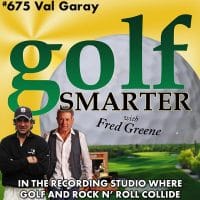 675: Val Garay is the Grammy-winning music producer behind hits like, “Bette Davis Eyes” with Kim Carnes and “Handy Man,” with James Taylor. Val’s 100 gold and platinum records, nine Grammy nominations with five Grammy wins is only part of his equation. He’s also a golf nut like us. In this conversation with host Fred Greene, Val talks about how he started his passion for the game back in 1981 while laying on a beach in Kona, Hawaii, and his many championships at Riviera Country Club, including the 2016 players championship. He also talks about his playing partners from the music industry like John Baruck (Journey), Kenny G, Huey Lewis and others, as well as being a 5-time player as an amateur in the PGA/ATT Golf Classic.

This episode is brought to you by AutoSlash.com the best place to get the lowest prices for car rentals. Once you find the car you want, enter it into their system and they will search the web everyday to help you secure the best rate for the car you want to drive on your next trip. They’re also partnering with us to give away three $100 Amazon Gift Cards to three lucky listeners. Go to GolfSmarter.com/Autoslash to register and learn more about AutoSlash.com